Posted on March 24, 2010 by Gamecock Illustrated Leave a comment 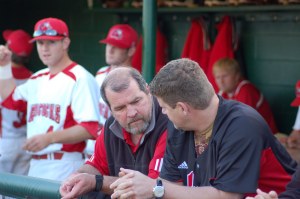 “Hall of Famers” Jim Skidmore and Todd Jones talk before the game. 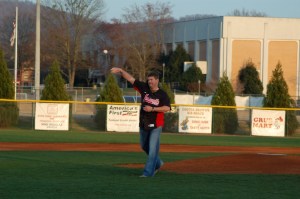 Former major league all-star Todd Jones was back at Jacksonville State for last night’s game against Troy. Jones, who played for JSU before being drafted by the Houston Astros in the first round of the 1989 amatuer draft, threw out the ceremonial first pitch.

Todd played as a freshman in 1987, striking out 49 in just 36 innings, and a 2-1 record. In a game against Shorter College, he struck out 7 consecutive hitters, and 12 in 5 innings. In the media guide for the following season, it states “…has a great arm with live fastball and sharp overhand curve…Needs to learn how to change speeds and improve location.” In his sophomore season, Jones added another 88 strikeouts in 74 innings. He was 7-4 with 1 Save. In his final season at JSU before being drafted, Jones went 6-5, and had 83 strikeouts in 73 innings.

Jones was a very successful major leaguer after his career at Jacksonville State. In 16 seasons in The Show, Jones amassed 319 Saves along with 58 wins. His career high was 42 Saves (led the league) in 2000 with the Detroit Tigers. He was named to the All-Star team that year, and came in 5th in the Cy Young Award voting. In 8 post-season games, Jones never allowed an earned run.

It was great to have Todd back to throw out the first pitch. As for the game, JSU scored 6 times in the 8th inning to win the game over Troy, 7-3! Whup Troy! We did! Jim Case’s team is getting hot and will play again in Jacksonville this evening.